I just had a talk to Linda Halimi, who takes part in the Festivali i këngës 2010 in December. She posted following into her facebook page, below u can see our smalltalk in Albanian, I'll translate for you into English: 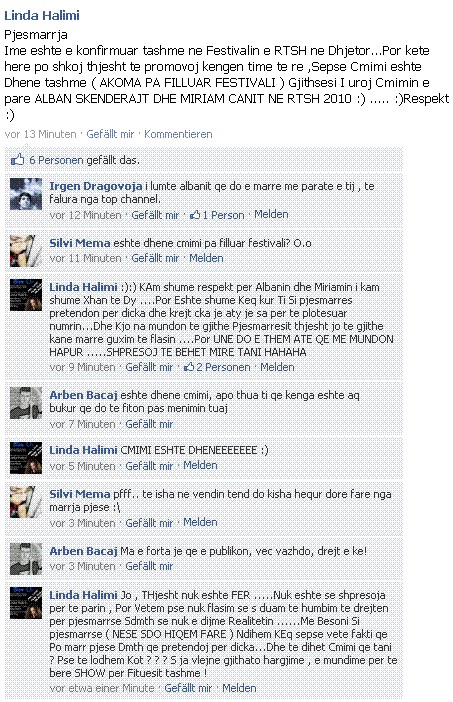 Free Translation into English:
"Linda Halimi: My participation at the festivali i këngës is confirmed... But this time i'm going to take things easy and just promote my new song as the winner has been already decided (THOUGH THE FESTIVAL HASN'T KICKED OFF YET). Nevertheless, I congratulate ALBAN SKENDERAJ AND MIRIAM CANI for the first prize at the FiK 2010! :) Respect :)
Linda Halimi: I feel much respect for Miriam and Alban... but it feels very bad if you take part only to fill out a number when you actually try to achieve something... This worries all of us simple participants, not all of us are allowed to speak out. But I WILL SPEAK OUT what worries me in public.. so that it can get better in the future haha...
Arben: Is the winner really decided or is that only your opinion on the winner song as you think it's such a wonderful song?
Linda Halimi: the winner is decided.
Arben: Strong of you to go public, just go on, you have the right to!

Linda Halimi:  No, it's simply not fair. It's not like I hoped to be the first place, but we only don't speak out because we dont want to loose the right to take part. It does not mean that we don't know the truth! Belive me, as a participant (if i won't withdraw) i feel bad because of the fact that I'm participating means that i am not there for nothing in the end... and if you know the winner already? Why put unnecessary effort into it. If they really feel the need for all those expenditures, they can do the SHOW also right now for the winner!
While writing, the debate has not finished on facebook:
Linda also states, that the Kënga Magjike will be the greatest Musical show that Albania has to offer in near future. At least it is a fair contest, also Top Fest belongs to those fair festivals.
"The RTSH says no artist is left in Albania to represent us to the world. Yet they do not give new artists any chance and aid for a that aim. I don't want to spend all that money for dresses, the way to Tirana etc. for nothing. People, my participation is DEFINATELY CANCELLED. I will publish my song later here. I am the only artist speaking out the truth though everyone knows it. I don't know if I ever return to that contest."
If Lindas statements turn out to be right, a comment of Irgen Dragovoja would sum the whole situation up:
"And they say new artists have to hand in the creations, songtexts, fotos just so that in the end Alban, promoting head of Vodafone wins the thing!"
IS the winner of the Festivali i kënges already DECIDED?! We'll see the outcome, have your say.
Posted by Arben at 17:02