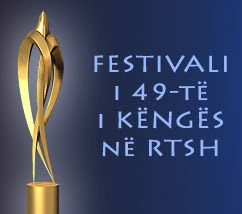 The preparations for this years Festivali i kenges, the National Final for the ESC 2011 have started. Many more details have now been published by Radio Television Shqiptar.
This year the Festivali i kenges system is more like the ones before 2008, which means there will be only 3 nights this year. Two semifinals with 14 artists each and a final with songs the jury chose from the semifinals.
The voting procedure will be similar to last year: All juries get a set of 1 to 8, 10 & 12 point (unlike 1-20 last year) and vote for the best 10 songs in each semi/final.
All in all we will have 28 contestants fighting for the ticket to Germany.

The new director of the Festivali i kenges is Bojken Lako, who has been participant himself last year, Bashkim Zahajn will be the stage director and Alfred Kaçinari the musical director.

As we are the first English site to serve you with these details, stay tuned with us for more news around the Festivali i kenges.